The Art of Progression

I seem to be a bit more serious about my art this year. Instead of working on it for a couple of hours once a week, I'm doing something at least 3 times a week now...sometimes more.  I have some good newsletters, and bloggers to follow, and I discovered a site that inspires me to try new things.

Though I have been attending art classes for a number of years, I wasn't progressing very fast. I guess I don't have any natural talent, but I do enjoy playing with the paint so I just keep going.  Last year a couple of things happened. First a friend asked me to bring some of my stuff to a church hall where it would be displayed along with hers over the winter months. Then I was asked to sit and paint in a garden that was part of a tour.  I don't know where I found the nerve, but I did it, and greatly enjoyed the experience.  The resulting paintings  were among the best I'd ever produced to that point, so that boosted my confidence.

More than one of the blogs I follow mentioned art journals, so I went and bought myself a multimedia journal, and have been enjoying having that space where I can create and experiment without fear of failure. Sometimes I can't seem to leave that little book alone! 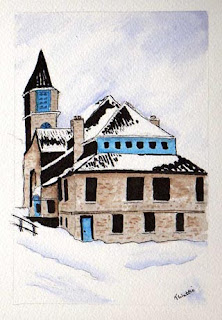 This year I found the Art House Co Op online and took part in a couple of their projects. First I did the 4x6 exchange project. We were instructed to create a piece of art just 4x6 inches in size, and mail it, along with a self addressed stamped envelope to the Art House Co Op by a certain deadline. They sent the artwork on to someone else who participated.  I created  a painting of a local church, and got back a card with a little motorcycle riding along a thin red line.  Another friend got back a truly beautiful card with a leaf pattern on it. 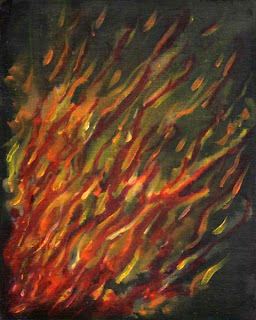 The second, and most recent project I got involved in was called Mystery Project. Everyone who signed up was sent a Prismacolor Pen and an little card with a theme on it.  The idea was to create something with whatever colour arrived to match the theme presented.  I got a Red Prismacolor pen, which has a thin nib at one end and a truly thick one at the other.  My theme was The Future of the Year.  Well, that instantly made me think of two things. The first was about being In the Red, and the other was more to do with fire. We are told there will be some major sunspots later this year and the long range weather forecast also tells us we will have hotter and dryer conditions than usual.  Either way, there will be flares or flames.  I decided to go with that one.

The second part of that project was to leave it anonymously, in a public place, for someone else to find. I've just left it in the perfect spot. I can't tell you where  it is though I did leave mention of the Art House Co Op Mystery Project on it so the finder might be able to look that up and discover what it's all about.

It was a fun project and I do hope they offer some more of these little creativity kick starters real soon.  Right now they are busy with the annual Sketchbook Project. I'm not involved in that , but am actually thinking about it for next year. I think that would be another major step forward.
Posted by Yabut at 9:38 PM