In Case You Didn't Know

One day, many years ago, my youngest son came home from school and basically gave me the blast.

"Why didn’t you ever tell me that," he said.

I don’t remember what it was I had neglected to tell him, but I do know that it was something I probably expected him to know without me telling him. That was a mistake I set about rectifying from that point on. I have been a wealth of information and advise ever since. I no longer assume anyone knows what I know, and I’m more than willing to share. Of course, that’s not always appreciated by those of the receiving end.

I’ll soon be collecting my old age pensions and I’m still finding out things I probably should have known years ago. For instance, I always had problems with left and right. As a child I remember one classroom had signs that said Left and Right in the upper corners at the front of the room. Since then my Mom often teased me about how I had to "face north" to know my left from my right, as I have often had to turn my body a certain way before uttering those words. As an adult, I taught a tai chi class, and would tell the students that if I turned the opposite way to what I was telling them, they should do what I do, instead of what I say. I often told them left when I meant right, and vice versa. One smart lady came up to me one night and had me hold my hands out in front of me, palms away. She pointed out that the thumb and index finger on the left hand formed an L. I was close to 50 years old by that time, and like my son, wondered why nobody had ever told me that before.

Recently I had to debone some chicken thighs for a Chatelaine recipe testing session, and had to go online to learn how. That’s another thing my Mother never taught me. Sure, I’ve tried to do that on my own in the past, but always gave up as it seemed more trouble than it was worth. With the internet, we can learn all kinds of handy tricks. Recently I learned how to make the kitchen sink so shiny I was actually afraid to do the dishes for fear of messing it back up. (If you want to try that look here.) And last night I came across information about my street that I didn’t know. Apparently it was named after Sir John Colborne, Lieutenant Governor of Ontario from 1828 to 1836. And, in fact, there were plans to name this village Colborne in 1828 but the application was put in too slowly and two other places got that name first, so they just decided to name the street after him instead. I admit I’m no history buff, but I’ve lived in this village for 37 years, and on this street for 35 years, and I never knew that before.

So, if I should happen to tell you something you already knew, or something you feel you could find out on your own, if you wanted to know, without my help, please understand. I’m not being bossy, or a know it all, and I'm certainly not telling you what to do.  I’m simply being helpful and generous with what ever knowledge or wisdom I may have acquired over the years. I don’t want you to wonder why nobody ever told you about something that might have made life easier for you. In some cultures I would be considered an Elder, and respected as such.

Posted by Yabut at 8:59 AM 4 comments: Links to this post

Nothing Natural About Art

In the old days, when I was in a photography forum for many years, the helpful people there would sometimes give me advise that was impossible to follow. They would try to tell me one of my photos would be better if such and such a thing wasn't in the picture, even if it was something that couldn't be avoided. Or they would suggest it might have been better if I had stepped a couple of feet to the left. In such cases I would have fallen off a cliff, or gone over some waterfall. One thing I like about painting is that I can solve some of these problems with a little artistic license.

Last month I mentioned that I was taking an online course to learn how to turn my photographs into paintings, since I had already learned that even the best photo didn't necessarily translate into a successful painting. We have just finished week 3 of 12 today.
Last week we had homework. We were supposed to post a photograph, both before and after cropping it to demonstrate that we have understood what had been taught so far. Now this was a difficult assignment for me since I generally crop in camera, so I had to really look for something that I had forced me to stand in the wrong place in order to take any picture at all. 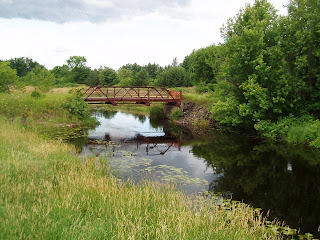 I found one that fit the bill because there was water where I would likely have preferred to stand. Then I decided afterwards that it wasn't much of a picture anyway, and I certainly never considered painting it. 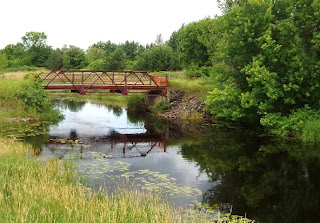 So I did the cropping, just to show that I understood the various principals that had been introduced the previous week.
I got rid of the excess sky, and anything else that wasn't necessary. This put the centre of interest in the upper left hand intersection of thirds, which is a good spot for a center of interest to be.
I also fixed it so the lead in grass didn't start in the corner, as that's not a good thing for it to do.

Saturday, during class, the instructor pulled up my photo from among those submitted, and after agreeing with the cropping, as far as I had taken it, proceeded to stick it in his Photoshop and use it to illustrate what would need to be done to the picture to make a decent painting out of it. 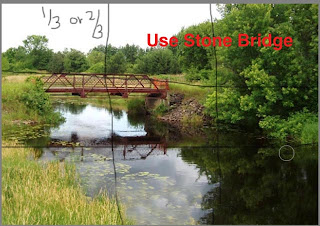 Firstly off, I know he doesn't like triangles, so I had already said I would deal with that while painting. He showed us all how, and did it for a totally different reason. My crop had the foreground grasses stopping in the wrong place, he said. They should stop at either 1/3 or 2/3 of the way across the bottom of the picture.
He pushed it back to the 1/3 position.
Oh hey, he told us to crop the picture, but never mentioned we could manipulate it. 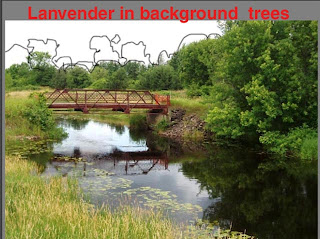 He also pointed out that the background trees didn't have a very interesting line. I had already noticed that too, and would have stuck some taller ones in there if I had been inclined to paint it. 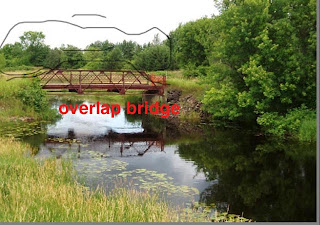 Then, of course, he didn't like the metal bridge, with all it's straight lines, and suggested I google for some stone bridge and stick that in the painting instead. Oh, and it would be good if I made it taller, so that it overlapped more of the background. 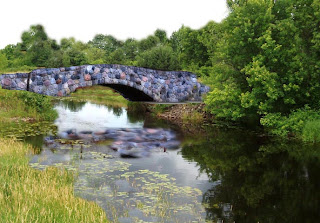 Oh hey wait, this useless photo might make a decent painting yet. It won't in any way resemble the original scene, but apparently it doesn't have to.
I've just learned that if you want to create art, it's best not to let nature get in the way.

Posted by Yabut at 2:49 PM 6 comments: Links to this post

While cleaning out the apartment of my 86 year old aunt, years ago when she moved into a nursing home, I was struck by the number of creams and lotions she had accumulated.  It was even more of a surprise because I had never thought of her as an overly feminine woman. She wore mainly trousers, before it became fashionable to do so. Her hair was parted on one side, and cut to chin level in a simple style. She never coloured it or fussed with it.  And I don't believe I ever saw her wear makeup of any kind. Perhaps with age, she felt her skin was dry and itchy and in need of some extra moisture. That might explain the creams and lotions, but certainly not the number of them.

Years later, I noticed my mother-in-law also seemed to have an over abundance of such products in her bedroom and bathroom too.  I think I even saw a bottle or tube in the kitchen and living room from time to time. I started to think of this as an old lady trait.  Since my mother-in-law was also in her eighties by then, I wondered if it wasn't so much a dryness thing as a possible memory problem.  Did they simply forget they already had the necessary creams and lotions at home?

Today the cosmetic companies keep coming up with some miraculous new cream or lotion.  I myself, being quite a fluffy female, find it hard to resist trying these marvelous new concoctions.  If a company offers free samples, I jump at the chance to try it.  If  they put products I already use and like on sale, I stock up.  If they introduce some new amazing idea I.....oh wait.....I tell myself, I have enough creams and lotion.  I don't need anymore right now.  I'm already confused as to which to use up first, with several varieties available in the bathroom, a couple more in the bedroom, not to mention the stacks of unopened samples contained neatly in a box or basket.

Perhaps this is an old lady trait after all, no matter what our justification is.  I have, after all, just been approved for both my Old Age and Canada Pensions.
Posted by Yabut at 11:51 AM No comments: Links to this post