Every year, for as far back as I care to remember, the first Christmas card to arrive in my mail box has come from an old highschool friend.  For those of you who don't know, highschool was darn near 50 years ago.  Last year, just before Christmas,  I lost my lifelong friend and that was a very sad thing.

I have just received the first Christmas card of this season.  Instead of my the usual one from my old friend, with her lengthy letter to tell me all about her life and that of her family, I got one that was simply signed, along with a Merry Christmas greeting that the makers no longer see fit to imprint on the card itself.  It was an instant reminder of my loss, and instead of the excitement a first card usually brings, it has just brought sadness.

Posted by Yabut at 2:23 PM No comments: Links to this post

I've had a new grand-dog for a week now. I was holding off so I could post a picture of him, but my son brought him to visit with me today, and I forgot all about taking a picture.  He's really cute and for now you will just have to take my word for it. I'll post pictures when I get some.
........I just hope he's still a puppy when that happens!
Posted by Yabut at 11:36 PM 1 comment: Links to this post 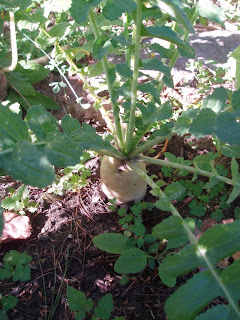 As I mentioned in my Garden Adventure post earlier this year, I had no deer for a while so I decided to plant a garden. One of the things I planted was an assortment of lettuces.  Everything was going fine until one day I noticed something strange.  There was this white thing sticking up out of the ground.  As far as I knew, lettuce didn't grow big thick roots like that, so I took a picture and put it on Facebook, asking my friends if they could identify this plant.

I got all kinds of responses, running from white carrot and parsnip to horseradish.  After checking out those plants online, I knew it wasn't any of them.  I still had a mystery on my hands.  And for some reason, I stopped eating the leaves.  I mean, I had planted lettuce, and this sure wasn't a lettuce, so I wasn't eating it until I knew more. 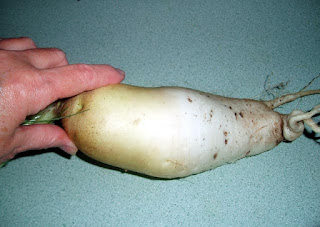 A friend of ours, Brian Henderson,  used to be the horticultural professor at Algonquin.  He's now the head gardener at Upper Canada Village.  While out prowling the countryside one day, we stopped in for a visit.  As we were about to leave, I mentioned this strange plant and he said it sounded like a Daikon Radish.  I had never heard of such a thing, but I must have described it really well because, when I looked it up online, that's certainly what I had. 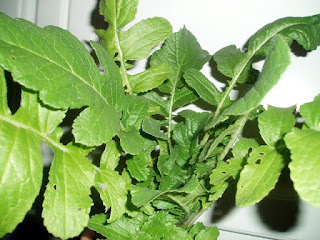 I read that they don't mind a hard frost, so I left it in the ground until this week when morning temperatures were often around minus 7C. Then I dug it up, washed it off, removed and stored the leaves and wondered what to do with the thing.  The younger leaves can be used in salads, as I had been doing in the beginning.  The bigger leaves can apparently be cooked like spinach, or used in recipes calling for spinach or kale.  The root itself, I figured could be grated and used in salads too. 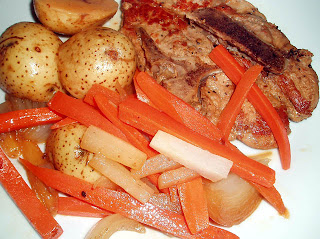 A friend came for tea yesterday, and I showed her what I had accidentally grown.  She knew what it was right away, and said she always had to get hers at a farmer's market!  I asked her what she did with them, and she told me they were good in stir fries and stew.  I was planning on having a meal of pork shoulder chops, with onions, potatoes and carrots all cooked in the same pan.  I decided this was a good time to try cooking some of my Daikon radish too.  It was actually very good, and now I'm planning on creating a stir fry soon.

Like my friend,  I will be looking for these daikon radishes at farmer's markets in the future. I can't imagine growing a whole row of these things as one is good for several meals!  One or two a year will make a nice change of pace though, so I will be looking forward to finding them.

Finding this new vegetable growing in my garden was a much better surprise than finding that the deer had eaten all my hostas, as they had for the past couple of years.  That's for sure!
Posted by Yabut at 11:21 AM No comments: Links to this post

Today I learned that when you iron 7 pairs of pants and stack them to put away when you are done, the pairs on the bottom of the stack could end up with more pronounced wrinkles than when you started.

Iron?  Oh, I forgot. Some of you have never touched one of those and don't know what they are for.  An iron is a hot instrument meant to flatten the wrinkles out of clothing.

Wrinkle?  Those are unsightly creases in clothing. Those of us born before a certain year feel our clothing looks neater with out them.

Times change.  People's ideas of fashion change with them.

This post has been a little look back in time, to see how some of your ancestors used to waste their time trying to remove something that just comes back anyway.
Posted by Yabut at 5:03 PM No comments: Links to this post